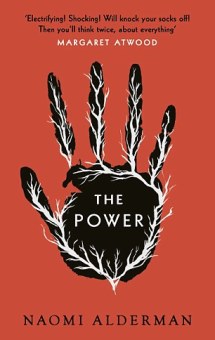 If women suddenly had the ability to electrocute at will, how would they use their power? Allie, abused ‘bi-racial’ orphan reinvents herself as Mother Eve, a cult religious leader. Margot initially tries not to use hers to become a senator, but resorts to it at the last minute. Roxy, member of an East end gangster family in London uses it to take revenge and take over the drugs business. Then there’s Tunde, the one male character, a Nigerian journalist who devotes himself to observing and recording the women’s rise to power.

Funny and graphic, The Power is a literary, sci-fi thriller that flips our society on its head: the balance of power shifts and men become the weaker sex. Everything you can imagine follows. We see some of the ways women are presently controlled in Saudi Arabia reissued as edicts against men: men aren’t allowed to drive and they have to have a female minder with them at all times. Girls learn to control and channel their power and to become soldiers in the ‘North Star’ training camps.

But when power is in the ‘wrong’ hands order begins to break down. As Lord Acton famously said: “Power tends to corrupt, and absolute power corrupts absolutely. Great men are almost always bad men.” In Alderman’s topsy-turvy world the same is true of powerful women: when Tatiana becomes the crackpot president of a warring state; pornography, escalating violence and anarchy ensue. And it spreads worldwide.

The breakdown of societies across the world is terrifying but it’s also very funny. The novel is purportedly a historical book written by a man thousands of years in the future after the Great Cataclysm. Letters bookending the novel are particularly funny: ‘Neil, I know this might be very distasteful to you, but have you considered publishing this book under a woman’s name?’

Alderman enjoys playing jokes–archaeological and historical ‘evidence’ is placed throughout the novel with images of artefacts from thousands of years before the present status quo (of the novel) where women’s superior strength is a given. In her acknowledgements she describes how the soapstone head of a male is still called ‘Priest King’ while the bronze female figure is known as ‘Dancing Girl’ and she adds: ‘Sometimes I think the whole of this book could be communicated with just this set of facts and illustrations.

Photograph by Felix Clay for the Guardian

She is an author who won’t be pigeon holed, a Renaissance woman who writes novels in the morning and designs computer games in the afternoon. Mentored by Margaret Atwood, the doyenne of feminist sci-fi, Alderman has cannily set part of the novel in the US where Margot is the rising star of politics; and I’m sure following on from Disobedience a film of her novel which is due to be released in 2017, a film of The Power must already be in the pipe line (although you may have to cover your eyes at some of the more graphic scenes of electrocution; it was ‘shocking’ to read them…).

This is a page turner of a novel but it is also subtly nuanced. It asks important questions, most of which can’t be answered simply: ‘However complicated you think it is, everything is always more complicated than that. There are no shortcuts. Not to understanding and not to knowledge. You can’t put anyone into a box.’