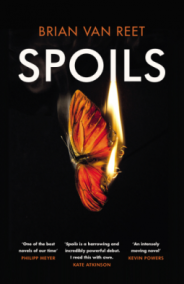 Spring 2003, coalition forces are advancing on Iraq. Images of a giant statue of Saddam Hussein crashing to the ground in Baghdad are being beamed to news channels around the world. Nineteen-year-old Specialist Cassandra Wigheard, on her first deployment since joining the US army two years earlier, is primed for war.

For Abu al-Hool, a jihadist since the days of the Soviet occupation of Afghanistan, war is wearing thin. Two decades of fighting – and the new wave of super-radicalised fighters joining the ranks in the wake of the September 11 attacks – have left him questioning his commitment to the struggle.

When Cassandra is taken prisoner by al-Hool’s mujahideen brotherhood, both fighters will find their loyalties tested to the very limits.

Great writing doesn’t announce itself – you don’t notice it until you are under its spell. Later, the scenes come back to you, crystal clear. Jonny Geller, literary agent, Curtis Brown.

Brian van Reet’s novel is full of stunning images, told in spare prose. A hard-hitting, pacy page turner of a novel. A story of confusion, blunders and uncertainty with sudden horrors inflicted both by military weapons and more primitive means. Spoils focusses on the lead up to one particular attack and its aftermath, examining the lives of three people caught up in the conflict. We see how strong the will to survive is in the worst of circumstances: the claustrophobia of an army tank or a make-shift prison. The fluctuating allegiances in time of war and the extremes people will go to under pressure are presented with visceral detail. Visceral but also cerebral – this Steinbeckian novel also makes you think. Although it lacks the lyricism of Kevin Powers’ The Yellow Birds, Brian van Reet’s thrilling novel, with its privileged view, can certainly stand alongside it.

Spoils is an important and harrowing commentary on the key international conflict of the 21st century, but ultimately it is a profound meditation on what it means to live and to be alive.

Brian Van Reet was born in Houston. Following the September 11 attacks, he dropped out of the University of Virginia and enlisted in the U.S. Army. He served in Iraq under stop-loss orders, achieved the rank of sergeant and was awarded a Bronze Star for valour. After an honourable discharge he studied at the University of Missouri and later the University of Texas. His stories and essays have appeared in the New York Times, the Daily Beast and the Washington Post.

Interview with Brian van Reet about his experience of war and and writing https://www.penguin.co.uk/articles/in-conversation/interviews/2016/dec/brian-van-reet-on-his-novel-spoils/