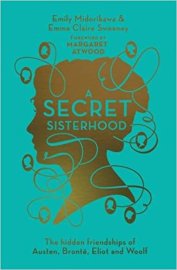 In A Secret Sisterhood, Emily Midorikawa & Emma Claire Sweeney explore the often forgotten, or glossed-over, friendships between women writers of the 19th and early 20th centuries.

Historically, male literary friendships whether supportive or acrimonious, have been meticulously scrutinised and recorded, with whole volumes devoted to: Hemingway and Scott Fitzgerald, Wordsworth and Coleridge, Verlaine and Rimbaud to name but a few. And, in this traditionally male-dominated society, important friendships between women writers have been consigned to oblivion. Austen is remembered for her place in the family and for her unmarried status; Charlotte Bronte is cast as the devoted older sister, defined by her early death; George Eliot is seen as a solitary figure shunning convention to live with George Henry Lewes, and Woolf has been defined by her mental instability and by her vindictive relationship with Katherine Mansfield.

A Secret Sisterhood turns this ideal of the ‘angel in the house’ on its head. Yes, these women may have had siblings and partners to support them, but they also benefitted from complex and close female friendships that rewarded and challenged them, both emotionally and as writers. Austen valued the friendship of her niece’s governess who wrote dramas; Charlotte Bronte found it in Mary Taylor, an early feminist, and Eliot enjoyed a lengthy correspondence with Harriet Beecher-Stowe, the author of the anti-slavery book Uncle Tom’s Cabin. Woolf’s relationship with Mansfield was precarious, but they recognised in each other the literary genius in the ‘echo coming back to me from her mind’. A Secret Sisterhood shows us how friends and family hid these ‘sisterhoods’ and suppressed documentary evidence of friendships that didn’t fit the image of the ‘lady writer’. I was particularly taken by Charlotte Bronte’s friendship with the feminist Mary Taylor who said of her decision to learn algebra ‘it is odd in a woman to learn it, and I like to establish my right to be doing odd things.’ She also defied convention by travelling to New Zealand as a single woman.

Beginning with their blog Something Rhymed, Emily and Emma have minutely researched the correspondence and diaries of these four writers, as well as bringing to light new evidence, to provide a fascinating exploration of writerly relationships. In their own friendship they have supported and celebrated each other’s literary careers since the first meeting in their early twenties when they admitted to each other that they were writers.

They have a fine eye for period detail, although for any reader already familiar with Victorian and early 20th century novels, it may be unnecessary and indeed occasionally strays into over-writing. But, with a foreword by Margaret Atwood, known for her ability to hold the mirror up to societal norms, A Secret Sisterhood is a much-needed piece of research, as well as very readable and accessible. The research is so well integrated that it’s only when you look at the extensive notes and bibliography that you see the detective work that has gone into the book. A Secret Sisterhood also benefits from a beautifully designed and eye-catching cover which would make it a fine present for a book-loving friend.

For a woman, until relatively recently, it was so ‘odd’ both to be a writer and to have female friends that it was largely kept hidden. Emily Midorikawa and Emma Clare Sweeney have done us a great service in bringing the secret out into the open. 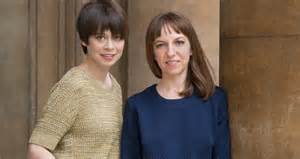