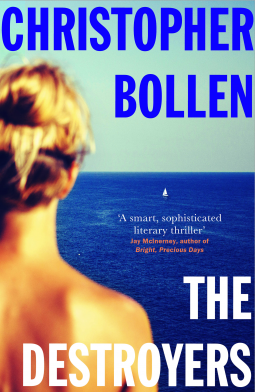 Ian Bledsoe, red-haired and ‘a professional big heart’, has been discredited and disinherited, so leaves the U S to make a last ditch attempt at starting over on the holiday island of Patmos. Charlie, his childhood friend, runs a business letting out luxury yachts and, very soon takes Ian on as his ‘Number 2’. Ian thinks his luck has turned: he’s got a job on an idyllic Greek island, he’s mixing with the rich and beautiful and he meets an old girlfriend. But no one is quite as care-free or innocent as they seem.
Growing up, Ian and Charlie used to play ‘destroyers’: a game in which they set up increasingly dangerous imaginary scenarios for each other to escape from, like an elaborate game of chess. The novel is based on the conceit that Charlie is now playing for real; and when he goes missing, Ian is unwittingly pulled in. ‘One lie concocted between old friends… [grows] to the size of an island’ and soon he’s involved in the murky dealings of Charlie’s real enterprise, complete with dodgy priests, a shady group of hippies hoping for the apocalypse, and drugs, diamonds and dynamite; all set against the tragic background of the Syrian refugee crisis.
The Destroyers examines: loyalty & friendship, fathers & sons, the use & abuse of power, as well as deception & self-deception. The fast-moving plot twists and turns, the characters are all suitably flawed and interesting, and the prose is a joy to read.

I read this book in two sittings; it would make a fantastically absorbing holiday read.