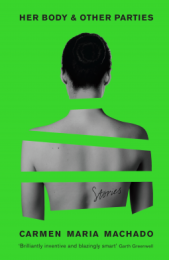 One of my favourite books of 2017, these extraordinarily vivid and visceral short stories come from the American writer, Carmen Maria Machado who lives with her wife in Philadelphia. She’s been widely published in magasines and anthologies, but this debut collection demonstrates her dizzying ability in both storytelling and language. It’s not surprising it was shortlisted for the NATIONAL BOOK AWARD FICTION PRIZE 2017.

These stories have a strong vein of dark humour, but it’s difficult to categorise Machado’s style as each story if so completely different from the previous one. Sometimes disturbing, gothic or erotic (like a contemporary Angela Carter), what links them all is the relationship between women and their bodies; how women are treated by men and by love between women. In one story a writers’ retreat goes horribly wrong; in another women’s relationship with clothes is taken to the extreme and women become part of the clothes. In another the youngest sister in a family finally opts for gastric band surgery and is haunted by the ghost of her former self, gurgling underneath the floorboards.

If the stories can’t be categorised, the language certainly can: precise, fresh, inventive and utterly new, with original and startling images. In The Husband Stitch Machado dissects the role of women in folk tales and stories and tells us: Brides never fare well in stories. Stories can sense happiness and snuff it out like a candle. The story, Difficult at parties has a killer first line: Afterwards, there is no kind of quiet like the one that is in my head. Paul brings me home from the hospital in his ancient Volvo. In The resident a sinister atmosphere is evoked in a description of the entrance to the hotel: the wood curled in organic tendrils from where the doors met, like an octopus emerging arms and suckers first from a hiding place. In Mothers a woman leans in to a mirror to put on mascara, the amoeba of her breath growing and shrinking. This technique of defamiliarisation works particularly well in creating the strange and threatening worlds of Machado’s fiction.

These stories may often be dark and even disturbing, but they are literary horror of the highest order, defying expectations of what short fiction ‘should’ be. Ultimately this collection is a joyous celebration of lesbian relationships and of the strength of women to overcome misogyny. By the end of this ground-breaking collection I’d challenge anyone to disagree with the assertion that:  It is my right to reside in my own mind. Which should be a basic human right, certainly the right of any woman and of course, of any author. As the narrator of the first story says: This isn’t how things are done, but this is how I am going to do them.