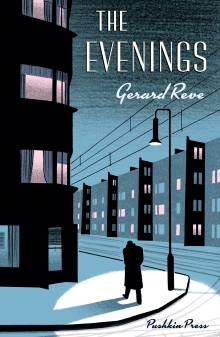 Originally written in Dutch in 1946 The Evenings will be unfamiliar to most English-speaking readers. In Dutch-speaking countries it is considered a classic, coming of age novel of (late) adolescence ranking with The Catcher in the Rye or On the Road. That it hasn’t been translated into English until now is difficult to believe, but in Sam Garrett’s lively, engaging translation, published by Pushkin Press, we can at last read this fascinating gem.

The bleakly, darkly funny story takes place during that dead time of year between Christmas and New Year when nothing much happens. Frits van Egters is twenty-three, lives with his parents in an apartment in an unnamed town and spends his days working in an office.

‘I take cards out of a file. Once I have taken them out, I put them back in again. That is it.’

Most of the story happens when Frits has finished work: hence the title of the novel. Each evening he listens to the radio, goes out to see friends, smoking and drinking, and wanders around the city. He lives in his own head, tells inappropriate jokes indiscriminately and is obsessed by baldness: I would be horrified to know that I was going bald. I would lose all desire to live. But please don’t misunderstand me, I don’t mean to discourage you.

Frits is profoundly bored with life, and with living with his parents: ‘It has been three days since Mother asked why I don’t join an athletic club,’ he said to himself. ‘That is exceptional.’ He is disturbed by his father’s physical deterioration: How could anyone develop a paunch like that… a pregnant manservant.

He also has unsettling nightmares about death but enjoys riffing on his thoughts about death with his friends:  Cancer is a quite marvellous disease…. Gruesome, incurable, grand. Sometimes he finds it difficult to stop talking. Later in the novel he says: Maybe, if I go on talking…I can distract them.

Frits is lost; he is searching to make some kind of sense of life, of all the days left to him. There is no one he really connects with but he sometimes talks to a toy rabbit.

I found The Evenings mesmerising and very funny, a strong contender to be a classic of mid-century absurdist European literature. In the end it is profoundly moving and hopeful: ‘The year is no more Rabbit, I am alive. I breathe, and I move, so I live. Is that clear? Whatever ordeals are yet to come, I am alive.’

It is a book I’m happy to recommend and look forward to re-reading.

“… like Stoner, The Evenings is brilliantly written, and has a maximum impact on the reader’s soul.” Oscar van Gelderen, the Dutch publisher who rediscovered John Williams’s Stoner

“Very funny and strange… Reve is a writer who may yet ‘catch on’ in the Anglophone world” Lydia Davis, winner of the Man Booker International Prize

Gerard Reve (1923-2006) is considered one of the greatest post-war Dutch authors, and was also the first openly gay writer in the country’s history. A complicated and controversial character, Reve is also hugely popular and critically acclaimed – his 1947 debut The Evenings was chosen as one of the nation’s 10 favourite books by the readers of a leading Dutch newspaper while the Society of Dutch Literature ranked it as the Netherlands’ best novel of all time.