Speak Gigantular is a fascinating collection of surreal, and sexually charged short stories from Irenosen Okojie. Strange and unexpected elements of nightmare and magic merge with everyday urban life and heighten the predominant themes of loneliness, alienation and mental breakdown. Set mainly in London, but with a few further afield these are narratives to dip into and enjoy.

In Animal Parts, the first story in this collection, Henri is born in Denmark with a long, grey tail, but it’s not until he is subject to months of graphic bullying that he realises ‘His mother had lied. He wasn’t special. He was cursed.’ The story builds to a shocking conclusion where his mother is forced to an act of savagery to make him socially acceptable.

Loneliness itself becomes a character in Footer where a woman, succumbing to ‘the feeling of being worshipped, to a delicious, deviant unspooling attached to a man’s tongue flicking between her toes’, dates a series of foot fetishists. It’s only at the end that we find out there have been a ‘series of sexually motivated disappearances’ and that the woman is not all she seems.

Snapper details the relentless disintegration of a relationship that has begun after a road crash: ‘I was holding a bag of oxtail on Green Street at Upton Park when the accident happened.’ Cronenberg’s Crash came to mind as I read this story.

In this collection of unusual and imaginative stories Irenosen Okojie has created a language that is vigorous and exciting. Just a few feel as if they’re trying too hard to be quirky and strange and don’t justify their inclusion, but Speak Gigantular is a memorable set of stories that I would recommend to anyone interested in the continuing revitalisation of the British short story. 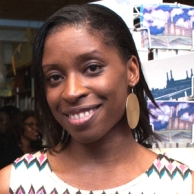 Irenosen Okojie, winner of a Betty Trask Award 2016 for her debut novel Butterfly Fish, is a writer, curator and Arts Project Manager. She has worked with the Royal Shakespeare Company, the Southbank Centre, and the Caine Prize. Her writing has been featured in the Guardian and the Observer. She was a selected writer by Theatre Royal Stratford East and Writer in Residence for TEDx East End. In 2014, she was the Prize Advocate for the SI Leeds Literary Prize. She is a mentor for the Pen to Print project supported by publisher Constable & Robinson. She lives in east London.

Jacaranda Books is a relatively new publisher priding itself on ‘Promoting diversity from boardroom to bookshelf’. www.jacarandabooksartmusic.co.uk