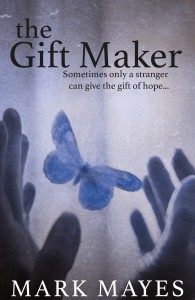 Sometimes only a stranger can give the gift of hope.

Late one night, Thomas Ruder receives a strange package: a small blue box. Another such item is delivered to his friend Liselotte Hauptmann. These ‘gifts’ will change their lives forever. In the far-off border town of Grenze, a play is to be performed at the Sheol Theatre. Reynard the impresario expects a very special audience. Thomas and Liselotte, together with their friend Johann, are drawn into Reynard’s seductive web, as Daumen, the gift maker, must decide who his master really is.

My review: A curious mixture of humour and fantasy makes Mark Mayes The Gift Maker an interesting debut novel. Not normally a fan of fantasy fiction, I was drawn into this novel because of the story, the language and the setting.

The plot is well-managed and seamlessly interweaves the three stories of Thomas, Liselotte and Jo (short for Johan) as they are taken out of their own small world to a strange fantasy world where nothing is as it seems. Sometimes a beautiful dream, sometimes horrific and shockingly nightmarish, everything is masterminded by the charismatic Reynard.

The writing is of a high quality earning its label of literary fiction, and the reader is challenged with a demandingly literary vocabulary – thank goodness for Kindle so you can click on a word you don’t know. Occasionally the writing strays into the ‘poetic’ in the negative sense of the word, but overall it is lyrical and musical. A pleasure to read.

The elements of folk and fairy tale are vividly drawn, with elements of the Brothers Grimm, Hans Andersen and Angela Carter. Wolf-like creatures, huntsmen, magic apples and old couples living in snow-covered mountains make the setting fascinating. I loved the inventiveness of the Germanic names and sinister politics lurking in the background. The world created here is well-drawn, and just slightly off-kilter to make it a fascinating place to spend time. I was strongly reminded of the best kind of children’s stories: The Snow Queen, The Box of Delights and Emil and the Detectives but written for an adult audience.

My only disappointment was the ending. Everything was resolved, and in a surprising way, but I would have liked to see the characters back in their university town, changed by their quest, but happily drinking Malzbeer. Maybe that says more about me…

Before becoming a writer, Mark trained as an actor at RADA. He subsequently worked in theatre and television both in the UK and abroad. He has worked variously as a cleaner, care-worker and carer, salesman, barman, medical transcriptionist, warehouse worker, and administrator.

Mark has published numerous stories and poems in magazines and anthologies in the UK, Eire, and Italy, and in particular has had several stories published in (or accepted for) the celebrated Unthology series (Unthank Books). His work has been broadcast on BBC Radio 4 and the BBC World Service. He has been shortlisted for literary prizes, including the prestigious Bridport Prize.

In 2009, Mark graduated with a First Class Honours Degree in English (Creative Writing and Critical Practice) from Ruskin College, Oxford.

Notes: Currently living in South Wales, Mark is also a musician and songwriter, and some of his songs may be found here: https://soundcloud.com/pumpstreetsongs

3 thoughts on “The Gift Maker”