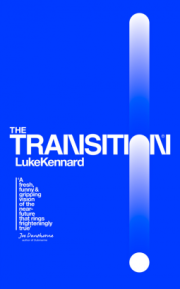 Luke Kennard is already a successful poet and academic. His debut novel is a witty, funny and tender take on the plight of the generation stuck in rental property with huge financial debts and uncertain job prospects.

Feckless hero, Karl is in his thirties, has a Masters degree in the metaphysical poets and debts of £78,000. Determined to use his literary talents, he writes ‘consumer reviews of products he had never used and bespoke school and undergraduate essays’. Karl is devoted to his wife, Genevieve, a primary school teacher who is sensible and bi-polar. They are falling deeper in to debt. To make ends meet he juggles credit cards in a ‘seventeen-card private Ponzi scheme’ and is finally driven to a dodgy job supervising two ‘click-farms’ to ‘generate false traffic for websites’ which turns out to be much worse when his boss is skimming off money for himself.

Faced with a prison sentence Karl opts for an alternative ‘the Transition’ – a ‘holistic approach to getting your life back on track’, like a speeding course ‘except your wife has to go with you and it’s six months’. Still carrying on with their day jobs, Karl and Genevieve have to give up everything and move in with their mentors, an older couple, Janna and Stu who will help them sort their lives out. Right from the beginning the marriage is threatened:

Genevieve is reluctant but takes the scheme seriously; Karl refuses to conform and constantly rebels in a low-level way, and they move further apart. Gradually the novel takes a darker turn as he discovers that the Transition is a social engineering experiment with sinister aims.

In spite of everything life throws at him, Karl never gives up on his devotion to Genevieve; he is a likeable and funny hero in an almost impossible world. A wry look at early 21st century society in the UK, The Transition is a thoroughly entertaining read.

Born in 1981 Luke Kennard won an Eric Gregory Award for poetry in 2005. He was shortlisted for the Forward Prize for best first collection in 2007, and in 2014 was named as one of the Poetry Book Society’s Next Generation Poets. He is senior lecturer in Creative writing at Birmingham University.