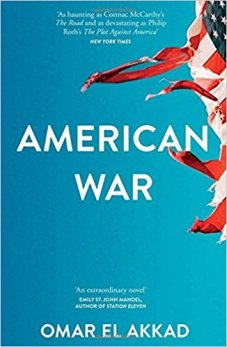 In the near future, climate change, rising sea levels and war have changed the global political and geographical landscape, with power shifted away from the US and into the hands of China and the Arabic Bouazizi Empire. North America has suffered catastrophic flooding and is in the grip of a second civil war over the banning of fossil fuels. The south won’t give up. South Carolina is shut off because of a crippling plague.

American War centres on Sarat, one of twins, whose family tries to make it to the north, to escape their hand-to-mouth existence in the south, but end up living for years in a sprawling refugee camp. There’s a constant threat of ‘Birds’, drones flying overhead to drop bombs, as well as from ‘homicide’ bombers carrying bombs or bacteria and viruses. The novel gives a bleak portrait of how an intelligent girl, marked out by her unusual physical size, becomes radicalised, and the terrible consequences of global warming and world war. Sarat’s story is pieced together, from her own diaries and from historical documents, by her dying nephew.

In this, Omar el Akkad’s first novel, we see a vividly realised world – the logical consequence of our love of fossil fuels and indifference to the scientific evidence for climate change. The novel is chilling in its bleak vision. But, clunky dialogue, too much ‘telling’ and a tendency to include whole chunks of description, make it disappointing. With a few more drafts and the possibility of some hope (surely essential to any novel about the survival of the human species) it could have been a superb debut.